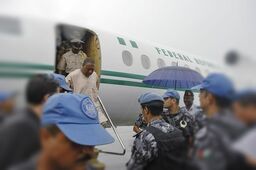 In 2006, former president Taylor, in exile in Nigeria, was turned over to an international court in The Hague to face trial on charges of crimes against humanity for supporting rebel troops in Sierra Leone's brutal civil war that claimed the lives of about 300,000 people in the 1990s. The rebels were seeking control of Sierra Leone's rich diamond fields to finance their acquisition of arms. His trial opened in June 2007. In April 2012, after deliberating for more than a year, the court, made up of three judges from Ireland, Samoa, and Uganda, convicted Taylor of aiding and abetting war crimes and crimes against humanity, including murder, rape, sexual slavery, and the conscription of child soldiers. His conviction is the first by an international court since the Nuremberg trials. He was sentenced to 50 years in prison.
Gyude Bryant, who was president of Liberia from 2003 to 2005 during the transition period after the 14-year civil war, was cleared of embezzlement charges in May 2009. He was accused of stealing about $1 million while in office.
Johnson-Sirleaf, along with Leymah Gbowee, also of Liberia, and Tawakkul Karman, of Yemen, won the 2011 Nobel Peace Prize in October "for their non-violent struggle for the safety of women and for women's rights to full participation in peace-building work." She won the prize during her bid for reelection. In the first round of voting, she took 44% of the vote. Her opponent in the second round, Winston Tubman, a former UN official, withdrew from the race, claiming the first round was rigged. Election authorities did not find evidence of fraud. Johnson-Sirleaf sailed to victory in the second round, winning 90% of the vote. Turnout was quite low—33%. ​